I had planned on running the Aids 5k the next morning but after the hotel fire I found myself hours away by bus rather than three blocks away on foot so I got a coffee and took the bus to get a rental car. On the advice of the local coffee shop. I drove to Cave Creek to climb Black Mountain.
Cave Creek is worth the trip. It’s a funky town full of the sort of gift shops you really have to dig through. Mexico is only 100 miles away and odds are most of what is sold in Cave Creek comes directly from there. It’s a bit like a Wild West town full of metal sculpture art

I had to stop at The Town Dump which claims to be “one of the world’s most unusual stores”. It was definitely unusual although that is quite a claim! (I was in a store in back woods Kentucky a few weeks ago which had a few pieces of furniture, some canned goods and lots of tomatoes!) While I was there I asked if they could direct me to the Black Mountain trailhead. The older gentleman at the cash told me he had lived there his entire life and had no idea where it was. (The mountain is in the middle of town and town is about 5k square). The woman working in the store told me she used to climb it when she was younger but a real estate agent told her she would never go up there if she knew how many poisonous snakes there were up there. 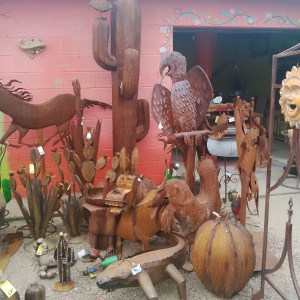 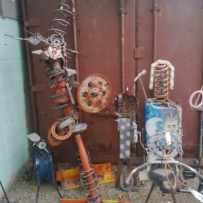 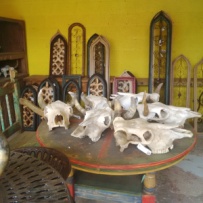 I used the internet and found the trailhead and a parking lot. The walk up is pretty straight forward. It’s easy to follow until you pass the first false summit. At that point the route is at little more difficult to determine but it is marked with blazes on the rocks.
After the snake comment I made sure I stomped my feet as loudly as possible on the way up the trail. I did not see any snakes although I did see a somewhat suspicious “nest” when I took a wrong turn on the way to the top. I made it almost all of the way to the top without seeing anyone else. It was at about that point that I started to question what I was doing all alone on a mountain in Arizona when no one knew I had gone there.
The view from the top of Black Mountain

I was somewhat relived when I saw a few other people on the trail. Oddly almost all of them were women, who like myself, were all alone. I passed a woman just before the summit who had a pack made entirely of weights. I asked her why she was carrying it and she told me it kept her in shape!

The walk up and down took less than two hours leaving time for a little more exploration in Cave Creek.
Practical information:
Cave Creek is on Cave Creek Road about 30 minutes from downtown Phoenix by car.
The trailhead for Black Mountain is on Schoolhouse Rd
Indian bread makes a great lunch

Although Cave Creek is more fun (in my opinion) the prices are no cheaper than they are in Scottsdale.