There are a couple of Caye’s just off shore from Belize City and the tourists generally stay on the Caye’s not in the city. The most well know and largest is Ambergris Caye, home to the city of San Pedro which famous people sign songs about. We chose to stay on Caye Caulker the smaller, more laid back backpacker-ish island and I would make the same choice if I had it to do again.
We arrived in Caye Caulker by ferry/water taxi from Belize City and walked from the dock to our home for the night. Caye Caulker is a relatively small island and there are very few cars or trucks on the island. Cars are replaced by bicycles and golf carts which share the dirt/sand road with people walking. Everything is basically within walking distance if you have a little stamina. The possible exception would be the houses and hotels past the airport if you had bags. 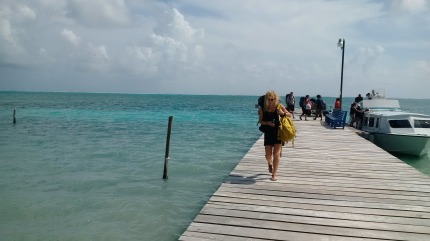 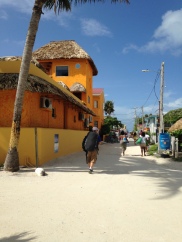 All beaches in Belize are public by law so although there are bars, restaurants and hotels along the water you can go into the water anywhere. Caye Caulker is very close to the reef, great for diving and snorkeling but there are only a few places where it is deep enough to actually swim close to shore and you can’t really snorkel from the island without a boat trip to the reef. 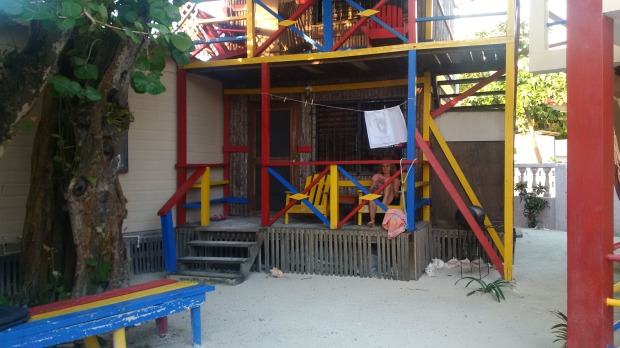 We spent our first night at Da Real McCaw. A colourful spot where we had a room with a veranda and a hammock. The room was basic, much nicer than the one in Belize City and still one of the cheapest rooms in the place. We had a coffee maker with coffee and a microwave and the rooms all faced out into a common outside area with picnic tables and chairs. We were unable to get a room there for the whole stay so we moved to the Blue Wave Guest House the next night which was Ok but the Real McCaw was nicer. 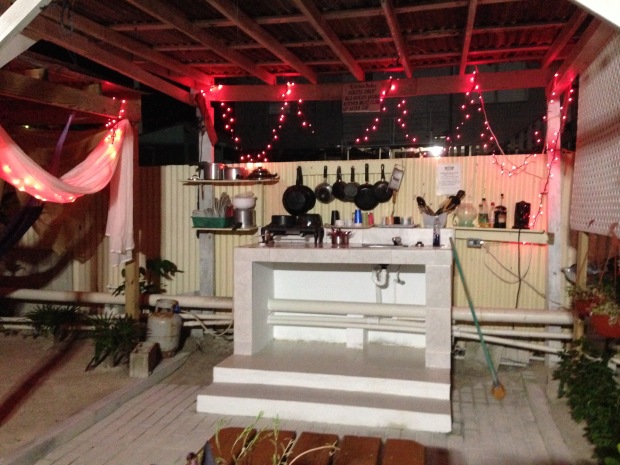 The sea was on the other side of the “road” along with the local craft market, individual vendors selling wood carvings, sliver jewelry, conch shells and textiles which were probably from Guatemala. In front of Da Real MCCaw there are a couple of freindly guys out there all selling ” Ice Cold coconuts -with rum!” 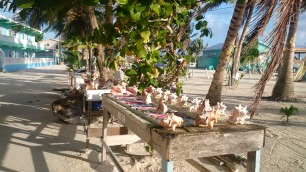 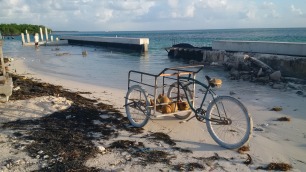 Everyone in Belize in general and Caye Caulker in particular says hi as you walk by and there were a couple of guys who appeared to just spend the whole day sitting on the side of the path saying hi to everyone. The island has several local characters including one man who spends most of the day riding his bike around the island wearing a hat made of woven coconut leaves. 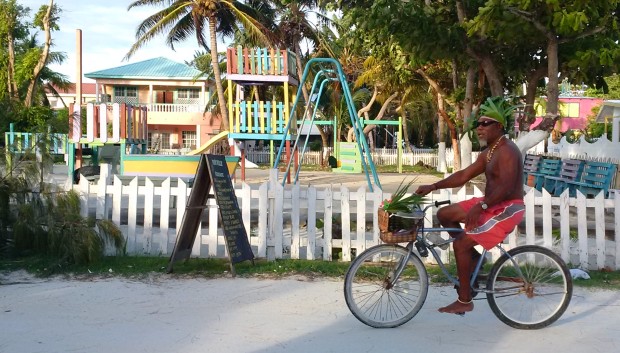 In the afternoon there are a few traveling bakeries. Guys riding bikes around the island selling baked goods such as banana bread, brownies and coconut cake. I am relatively sure some of the brownies have “special” ingredients. We only tried the banana bread which was very good. 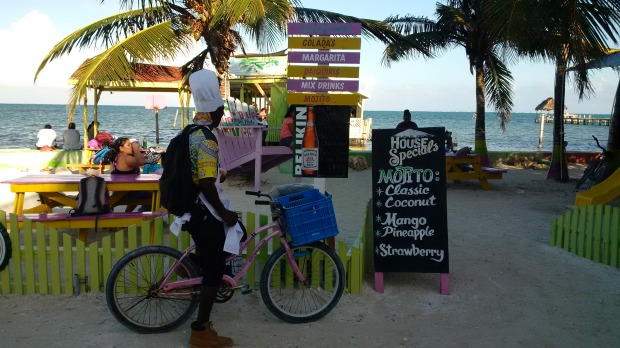 Because the reef is only one mile offshore the island’s beaches are not great. The best place to swim is “The Split” The Split divides the north and the south halves of the Island. It was originally dug as a channel for fishing boats but it has widened over the years. The Lazy Lizard bar occupies all of the south side of the split and it is a happening place night and day. Although the drinks are a bit expensive. The place to party at Sunset we were told although we never we never seemed to be there at sunset. You can swim off the docks and over to the other half of the island although the current is pretty strong and you have to watch out for boats coming through at high speed. The first time we were there a big private boat came by and two guys our age wearing Santa hats mooned everyone as they passed by. They rent kayaks and windsurfers and they are happy to have you buy a few drinks which most people do although they don’t say anything if you don’t. On our return trip in 2018-2019 the split had been redone. They added tables in the water  and a diving platform. They have also started having full moon parties late into the night with DJ’s dancing and fire pits. In general there is a lot of drinking going on in Caye Caulker. 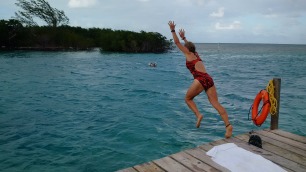 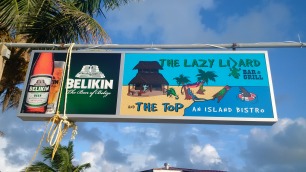 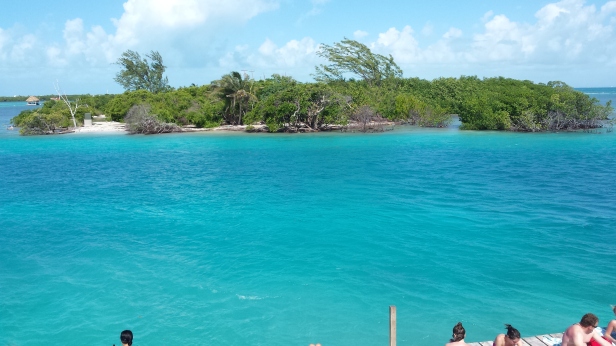 You can rent bikes but the whole island is only 4 km long and most of the buildings are in an area 2 km long and three streets wide so we just walked.
Based on recommendations from Lonely Planet and Rough Guide we went looking for the bakery and Syds which both books recommended highly. We discovered that Syd’s just closed permanently . While we were searching for Syds we were approached by a guy who was trying to convince us to go to Roys. We did not have a better plan and we were hungry so we went to Roys. The service was slow, my fajita tasted like curry and was served on rice because they ran out of tortillas but it was excellent. 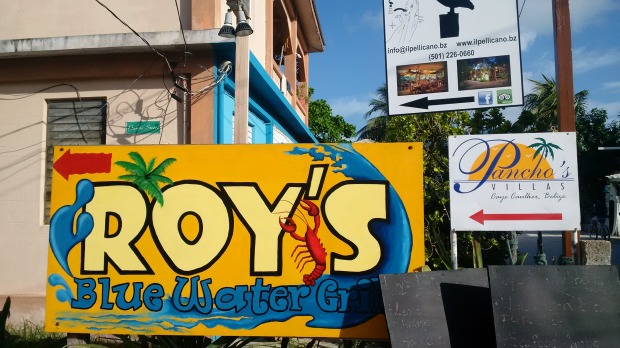 The motto on Caye Caulker is “Go Slow” so I ran slowly around the island the next morning. I ran through the more residential area of the island. The homes looked a little rough. While I was running Harold went to the Caye Caulker Bakery which is known for cinnamon buns. They were outstanding and only $2.50 Belize each. They have regular, extra raisins or extra raisins and icing. In general Belize had excellent cinnamon buns! 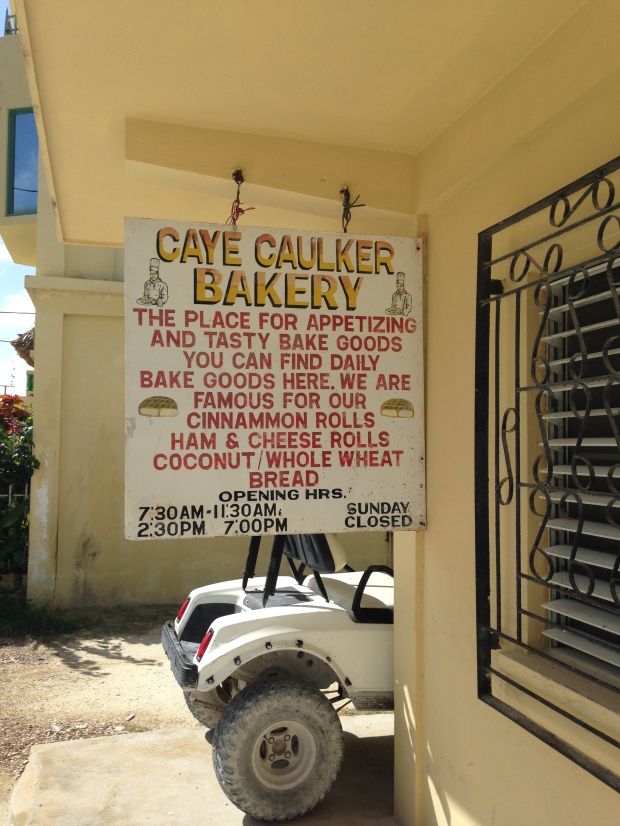 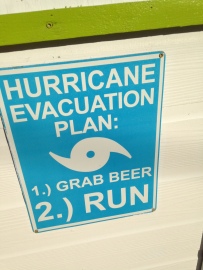 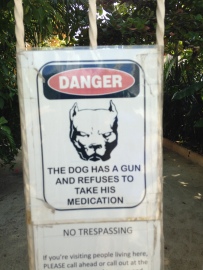 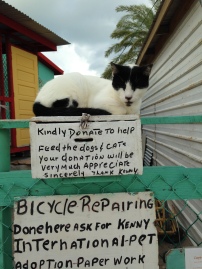 In the afternoon we did a $35 US half day snorkeling tour with E-Z Boy Tours. French Angel and Caveman Tours also got great recommendations. There were 8 of us on a small boat. It poured down when we left the island but the storm passed quickly. The first stop was a guided tour on the reef which is just a mile off shore. It was great to have someone pointing out the various fish, coral and plants. We even found a turtle.
The second stop was at shark-ray alley where then chummed the water with us in it. Sharks and rays came from everywhere! The sharks were primarily nurse sharks and the rays were huge. Obviously the sharks and rays had not read the park rules stating that we had to stay 3-5 feet away. It was a challenge to avoid bumping into them.
The third stop was a different area of the reef which we explored on our own. There were several other tour boats out but as we started out during the rain storm we were a little ahead of the others and it was not too crowded. The snorkeling trip ended with two bonus stops ( which I think everyone gets) one to see seahorses and a second to feed Tarpons which jump right out of the water and grab food from your hand. We went with Caveman on our second trip in 2019 the tour was basically the same. 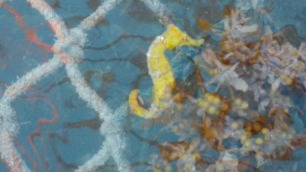 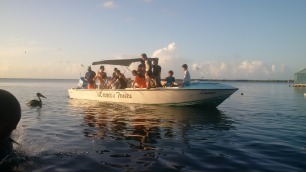 We had dinner at Mary’s which is off middle street so a little less touristy than Guy’s from the night before. They served fried chicken and burritos. The burrito was huge! There was a bonus cat who sat in my lap and it was cheaper than Guy’s but the food was not as good.
No one really seems to care who hangs out where on Caye Caulker so we sat on a dock with a view and watched the sunset from the back side of the island with a beer from the grocery store. 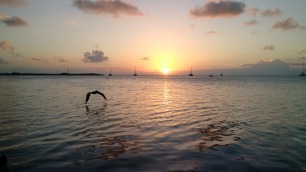 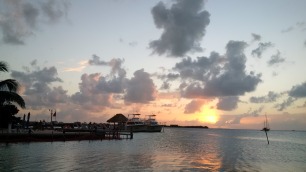 I went a little further for my run the next day and discovered the air field and a very odd looking church. The part of the island past the airfield includes many rental properties and a few guest houses and hotels.

With the new development on Caye Caulker you can now run the South Island as a loop. If you start by running around the split, follow front street until it ends at the graveyard (or just run along the beach). There is a path through the graveyard which takes you to the beach path which goes almost to the end of the Island. When you reach the dead end sign turn on the trail just before it to the right. That trail loops back to the end of the airport runway. There is a trail/road on the north side of the airport which you can take back to middle street. Once you hit middle street you can go North until you hit the football field which you can go through or around. The whole loop is about 7km. I ran it alone at 6:0 or ^:30 am and met other people doing it. It also makes a good walk but bring bug spray.
Overall Caye Caulker is very laid back with lots of rum drinks, beer and swings inside bars. Lots of drugs too I expect although other than the brownies no one offered us any. We did not do much late night partying but there were lots of drunk people out later at night.

Jennys to go food– Basically a cart on Crocodile street. Fry jacks and burritos. Open for breakfast and dinner. The fry jacks were really good!

Wish Willy Bar & Grill – Open air with big tables you have to share. We had Christmas dinner here. A severe your-self (we even had to carve) turkey and ham dinner with all the fixings and rum cake for desert. $35 Belize each. We met and shared with backpackers from all over the world. It was a great way to celebrate the season.

Reina’s It had just opened when we were there in 2016 and it quickly became our favorite spot. It still is. Great food, The menu has a limited number of items on it but everything we tried was great. A bit off the main tourist track on middle street. $15 BZ and up.

When we were in Caye caulker in 2016 there were a few small homes and a lot of mangroves on the North Island and not much else. When we returned in 2018 they had added power to the North Island and a big resort (big by Belize standards) you can take a regular boat shuttle to the resort from the back of the south island. We did not go but we were told it was pretty fancy. They are selling all kinds of lots for future development on the North Island now so expect lots of change.