To get from San Ignacio to the Guatemala boarder you can take a taxi or you can take the chicken bus to Benaue Vicjo del Carmen and a taxi from there to the boarder. The general feeling was that you don’t save much by taking the bus. The owner of our hotel told us to stand in front and a collective taxi would show up and take us to the boarder for $5 B each. Much less than the $20 B each we would have to pay if we got a taxi by the main square. He was correct about going to the boarder but we had to pay the going rate of  $20 B when we crossed back into Belize a few days later.

The Guatemalan family we met on Glovers told us it would take an hour to cross the border. We arrived there and were surrounded by money changers who told us we would have to pay to get into Guatemala and they would only take Guatemalan money- They lied and we did not change any money but in retrospect the exchange rate was not bad. If I had it to do again I would have changed a small amount of money.

You do have to pay a $37.50 B exit tax to leave Belize by land and they only appear to take cash. For reasons which were unexplained they charged us $40 B but it was not worth arguing about.

Customs for Belize and Guatemala are both on the same side of the river separated by a small no man’s land, getting into Guatemala was straightforward and there was no charge. Once we entered Guatemala we were set upon by money changers and taxi drivers. We had no Guatemalan cash but we had US and we had been told we could use that to get to Flores where we planned to find an ATM.

When we returned to Belize a week latter we stood in line in the sun for an hour to get through customs. We had no problem getting into the country and we were not charged an exit fee to get out of Guatemala or an entry fee for Belize. We did change money on teh way out at a rate of 4:1 which is not unreasonable.

We skipped the taxis and walked over the bridge to the collectivos stop. The collectivos are basically minivans which are cheap, 30 Q each, but they don’t go until they are full and they stop and take on passengers along the way. We knew that and we were fine with it. The collectivo station is to the left after your cross the river. When we asked several people pointed us in the correct direction.

Initial impressions of Guatemala: the roads were better than they are in Belize, despite it’s somewhat scary reputation everyone was helpful and there are armed guards, military and police everywhere. In Belize ATM’s often had security guards, in Guatemala the guards had sawed off shot guns.

Our collective filled up so we headed off to Flores making stops along the way to drop off and pick up people and things. There were stops where we all figured the van was already full but we still managed to fit in a family of four.

We stopped at a gas station and they collected our fares. We paid in US $ and we were definitely short changed on the change. We pointed it out and some of our change was returned but not all of it. This was the only time we had an issue on the whole trip and I suspect it would not have happened if we had the correct currency.

We arrived at the collectivo station in Santa Elena. Santa Elena was the most modern almost western city we had seen since leaving home. There were malls and even a Pizza Hut.

When we went back to Belize using the same route our collectivo stopped in the local market. As soon as we stopped we were surrounded by people trying to sell us things through the windows of the van. Everything from food and drinks to Colgate  toothpaste and a magical cream which would cure anything.

We were staying in Flores which is an island in lago de paten Itza. It’s not at all like Santa Elena. Flores is charming and historic with cobbled streets and colourful houses. This of course is possible because all of the commerce and industry takes place in Santa Elena which has a population of 25,000 only 3,000 live in Flores.

We took tuk tuk from the station to the Island it cost us 10 Q and we passed a modern mall and a Burger King on the way.

We stayed at the Green World Hotel which is painted green. There is an outdoor roof top area with a great view and coffee most of the time. The room was Ok with a private bath, a shower with hot water, a safe and a fan. We never did figure out how to make the safe work. The staff only spoke Spanish but they took Visa which was good because we were running out of money. Our room was the closest to the lobby so it was a bit loud. 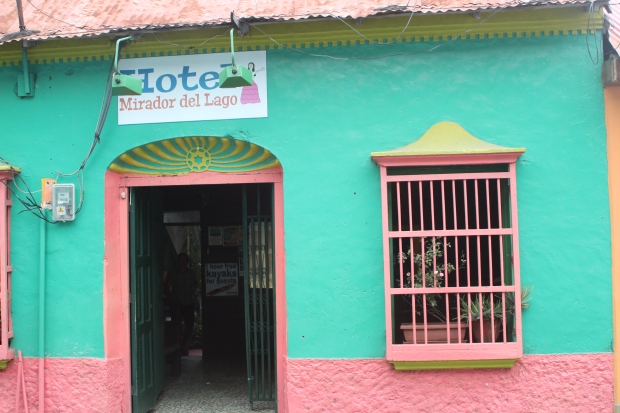 We went in search of a bank machine. There were three on the Island, we found them all but none of them gave us any money. I think they were all the same bank. We walked across the bridge back to Santa Elena. There is a modern shopping mall there with 2 bank machines. Neither of them would give us any money. Most larger places would take US money but the exchange rate was not fixed. We asked the hotel if they would exchange some US for us they said maybe in an hour. They sent us to another hotel who said no. We eventually found a convenience store who exchanged some money for us but the rate was not great. We planned to go to Tikal the following day and they only take Guatemalan cash so we were in no position to argue.

2 thoughts on “San Ignacio to Flores Guatemala and Back.”